Located on the border of Canada and the US, Niagara Falls has become an icon of border tourism between the two countries. Not to be missed. As a child I remember seeing the attraction of someone walking on a rope that stretches from one river to another. This attraction turned out to have been done long before in 1876 by an Italian woman named Maria Spelterini. He crossed the Niagara Gorge by walking on a rope even up to 4 times in the same month (July 1876).

My Experience in Niagara Falls

This is where my dream started to be able to see the Niagara Gorge in person, which is located in Niagara Falls, a waterfall in North America. This dream came true in the summer of 2016. I had the opportunity to spend a vacation in the US for 2 weeks and Niagara Falls was my last destination before returning to Canada. Niagara Falls is a city located in the province of Ontario, Canada and is located on the border of Ontario, Canada with New York, US. This border is the largest international border in the world. It is in this city that the famous Niagara Falls is located and is connected to the US via an international bridge called the Rainbow Bridge.

This Rainbow Bridge can be traversed by vehicles and pedestrians. By crossing this bridge, you can see Niagara Falls clearly and in a close distance. There is an interesting story about this Rainbow Bridge. Because this bridge connects 2 countries, its function is often misused by illegal immigrants. This can happen because crossing the Rainbow Bridge is the easiest way to cross national borders. Instead of just crossing but the immigrant “naughty” and deliberately staying in the destination country illegally. If one day you have the opportunity to walk / drive on this bridge, you have to go back to where you came from. 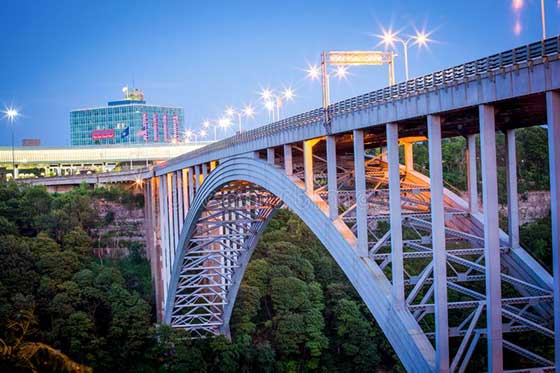 Because there will be a large enough nominal fine for the violation you commit. Because Niagara Falls is located on the border of Canada and the US, this tour can be reached from the Canada side or the US side. Because at that time I was in New York, I traveled from New York City by bus. The 7 hour journey was long but the atmosphere on the bus was quite supportive for me to take a nap. If you come from the US side, you will enter through Niagara Falls State Park. This is a park in the City of Niagara Falls in the Niagara County (a kind of local government), New York, Â US.

This park is the oldest park in the US which includes the American Falls, Bridal Veil Falls, and 1/3 part of the Horseshoe Falls (better known as Canadian Falls). Horseshoe Falls is the largest of the 3 waterfalls that make up Niagara Falls. This waterfall is located in the middle of tau on the Canadian – US border. 2/3 go to the Ontario area and the rest go to the New York area. The second largest of the 3 falls of Niagara Falls is the American Falls and is completely located within the US Territory. Bridal Veil Falls is the smallest waterfall and is also located in the US territory entirely.

Where Else You Can Visit in Niagara Falls

Between American Falls & Bridal Veil Falls there is Luna Island and between Bridal Veil Falls and Horseshoe Falls there is Goat Island. Have you started to imagine the position of each waterfall? Too beautiful to just imagine. It is better if you witness its beauty directly there. One of the reasons that make these three waterfalls look beautiful is the color of the water is so green. The solution of “salts” and “rock flour” from the strong erosion of Niagara Falls naturally produces beautiful colors. Do you ever know how tall Niagara Falls is? With a height of more than 50 meters, this waterfall has the highest flow rate among all the waterfalls in North America. Even the Horseshoe Falls is the waterfall that has the greatest strength! So it is not surprising that Niagara Falls has many roles, such as a source of electricity, recreation, commercial advertising to industrial interests.