Canada is famous for its beautiful natural scenery and well-maintained. Even today, there are more than 40 national parks scattered throughout Canada. One of the best known and the oldest national parks in Canada is the Banff National Park in Alberta.

End of 2018, my family and I had the opportunity to visit the national park that has existed since 1885. We started the journey from Calgary in a rental car driven by my sister, who had gone to Banff quite often. The Calgary-Banff trip takes about 1 hour, 30 minutes.

My sister arranged the itinerary while in Banff and explained that we would go to several lakes. When we first heard, we immediately protested, “Why are all the lakes?” But apparently, all the lakes we visited were very beautiful and had different impressions from each other.
We plan to stay in the city of Banff for 3 days 2 nights. It turned out to be a short amount of time because there were still so many places that we hadn’t been able to visit. It was actually still autumn, but the snow was thick with temperatures ranging from -10 to -18 degrees celsius, so some locations were closed.

What have we been able to visit? 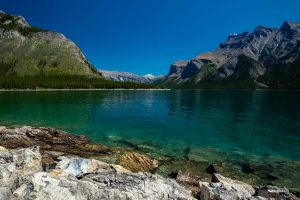 Our first destination is Lake Minnewanka, which is located about 5 kilometers from the city of Banff. For more than 100 centuries, locations around Lake Minnewanka’s initial location were very strategic hunting and camping sites. Local residents are very respectful and afraid of the spirit of the watchman of the lake, so they are given the name “Minn-waki,” which means “Water of the Spirits.”
Part of this lake was once a popular holiday town in the late 1800s called Minnewanka Landing. But the city sank because of the construction of dams in 1912 and 1941.
At present, the view of the city underwater can still be seen by divers. But for those who do not want to dive, the view on the water is no less beautiful, and if we are lucky, we can also see Northern Light in this area in winter.

We come in autumn, so we can only enjoy the beauty while taking pictures because it will be very cold if we take a boat around the lake. But in the summer, more activities can be done, such as hiking, diving, fishing, boarding, and more. 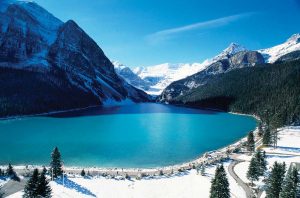 After being satisfied with admiring Lake Minnewanka, we continued our journey to Lake Louise. Before arriving in Canada, my father had advised us to go to Lake Louise because he often saw pictures of the beauty of this lake in several publications about Banff.

The lake is named after the fourth child of Queen Victoria, who is also the wife of the Governor-General of Canada (Marquess of Lorne), namely Princess Louise Caroline Alberta.

In summer, there are usually many visitors who enjoy the beauty of nature by kayaking or canoeing. But when we came, the lake water was frozen, and we could even walk on it very easily. At that time, the air had reached -7 degrees celsius even though it was still autumn.

Right on the east side of the lake stands a luxury hotel, The Fairmont Chateau Lake Louise, which was established in 1911. From inside the hotel, we can see the beautiful views of Lake Louise while relaxing and dining.

Actually that afternoon I still wanted to take a picture of the lake but was rejected outright by my father, who was already cold. Even my mother and other siblings had warmed themselves first by drinking hot chocolate and eating soup at the Fairmont hotel.

Near Lake Louise, there is also a lake called Moraine Lake, which is quite well known in the world, one of which is the Windows 10 login screen. But unfortunately, when we went there, Moraine Lake was closed because the terrain was quite dangerous in cold weather. 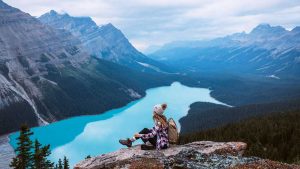 One of the lakes most often promoted by my sister is Peyto Lake. Because the view of Peyto Lake seen from the Bow Summit is indeed beautiful. So that Peyto Lake immediately entered the main visit list.

To get to the Bow Summit, we walked, so we had to rent winter boots for my father, while I and the others had indeed bought them in Calgary.
The rental fee was not expensive, only CAD 10 per day (around Rp 110,000). Rental of shoes, ski equipment, and other winter equipment can easily be found in the city of Banff at an affordable rental fee.

We are all ready for combat! Fight with snow and wind. Apparently, when he arrived at the location, the temperature was -13 degrees celsius. All our equipment is lacking. Beautiful, brightly colored jackets to be photographed must be sacrificed. I ended up wearing a thick jacket with a large size that belongs to one of the brothers. Forget all your wishes for beautiful photos.
The footpath that my brother used to take turns out to be closed, so we have to take another road that is more uphill. In the first few minutes, we were still excited to walk while taking pictures. But because of the very thick snow and the cold air, we could not walk quickly. Then my sister walked faster to see how far we had to walk, and indeed it was still further along the increasingly uphill road.

Finally, after 15 minutes, we decided to turn around and get back in the car. The wind was getting stronger and stronger, not to mention if we made it to the top, we had to walk far back to the car.

The jacket I was wearing was quite able to withstand the cold air. But parts of my face are still very cold. Finally, occasionally I use a hot pack (which is supposed to be for my hands) on my almost numb nose. Enough to reduce cold.